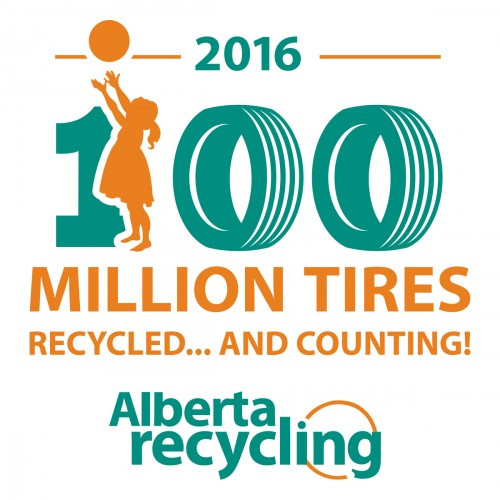 Congratulations to Alberta on the recycling of 100 million tires!

This significant milestone was celebrated in Lethbridge on September 9, 2016 at the grand opening of a new playground at Gilbert Paterson Middle School, where rubber crumb made from Alberta scrap tires was used for the playground surface.  The ceremony was attended by several provincial and local dignitaries.

To put Alberta’s achievement into perspective, 100 million tires laid side-by-side would circle the earth two times – the equivalent of about 80,000 kilometers.

Launched in 1992, Alberta’s tire recycling program was one of the first in Canada.  The program is managed by the Alberta Recycling Management Authority, which also manages the province’s waste paint and electronics.  Through the tire program, valuable material is diverted from landfills and recycled, creating jobs and new products that come back full-circle into the province’s communities:  Alberta Recycling’s municipal grant programs have provided over $12 million to communities since 2000.

According to Bob Barss, Chairman of Alberta Recycling, Albertans, municipalities, tire and vehicle retailers and the province’s recycling industry all played a key role in this accomplishment.

For Alberta’s news release on its milestone, which includes background information on the Gilbert Patterson Middle School project and the tire program’s operations, please go to: http://www.albertarecycling.ca/news-items/2016/09/27/recycling-milestone